Koh Phayam: Still (almost) like Thailand in the 1970s

Koh Phayam: Still (almost) like Thailand in the 1970s

(CNN)Ten years have passed since I first encountered Koh Phayam.

After seeing it described in a brochure I found lying on a table in a cafe in Bangkok's Khaosan Road as "Like Koh Samui in the '70s," I bought a ticket to go.

And stayed for six months.

This small kangaroo-shaped island on Thailand's Andaman Coast attracted me not for what it had -- even though it's home to a brightly colored and rarely sighted Hornbill.

The real lure is what it came without.

And none of the unfettered development that has turned Koh Samui and many Thai islands into parodies of their former stunning selves.

Last time I visited, the only way to Koh Phayam was on a slow passenger ferry from the city of Ranong, 300 kilometers north of Phuket.

It wasn't connected to the electrical grid -- only diesel generators and solar panels for a few hours of power each evening. There were no luxury hotels or resorts.

Returning a decade later, I was anxious to see what had changed.

Mostly it was good news.

The old Koh Phayam remains largely intact -- still a throwback to the golden times now lost from other popular islands.

Inevitably though, there were changes.

For starters, the journey there is quicker.

Last time I traveled on on a big old refurbished crab boat, a pleasant and serene journey across smooth ocean that took two or three hours.

Today noisy speedboats do it in 40 minutes.

Ten years ago my days on Koh Phayam involved fishing with villagers off the concrete pier where long-tail fishing boats came and went.

If I was lucky, I'd reel in a few red-bellied pacu, which I'd get cooked for next-to-nothing by at Baan Nam Cha, an organic cafe on the island's Long Beach run by a Frenchwoman called Stella.

These days there are no fishermen lazing about the pier.

Instead it's busy with a rush of human traffic as men load and unload boxes and crates from ships.

Riding a moto-taxis to Long Beach, I notice that what was once a pleasant cycle ride through greenery is now now a strip of restaurants, stores, bungalows, massage pavilions and construction sites.

Baan Nam Cha has changed too.

Once occupying an empty crossroad behind the beach, it's now part of a thriving retail hub.

I cannot help feel disappointed by the fact this little island had, apparently, been well and truly discovered. 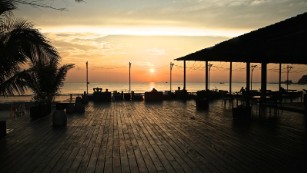 "People who talk about a property boom don't understand how expensive to invest here," says Togni, who owns and runs Cede, a brand new property on Long Beach.

"We have a very short season -- only four months of the year when it doesn't rain.

"There is not enough infrastructure on the island to accommodate thousands of people and I don't see them bringing electricity here anytime soon. So that means no ATMs, no jet skis and no big parties.

"So we get to preserve the beauty of this place."

During my first visit Koh Phayam I slept in a flimsy bamboo bungalow. This time I stay at Cede.

It's among one of a half dozen new barefoot-style micro-resorts on Koh Phayam appealing to a new generation of switched-on, eco-friendly travelers.

The resort features nine suites with oversize bathrooms, king-size beds, flat screen TVs and patchy WiFi, and a bar and restaurant on an expansive timber deck looking over the ocean.

"Not everyone likes to be a in a small hut," says Togni. "Some people want things to be bit fancier."

The arrival of luxury hasn't changed some things.

Looking out to sea the view is absolutely blue, with fishing boats and islands shimmering on the horizon.

Looking back at land, tall green mountain and thick misty jungle catch the eye in every direction.

Under the coconut and pine trees bracing the sand is a conga-line of new restaurants with names like Ziggy Stardust, Peacock and Friends.

This is ground zero of coastal development on Koh Phayam and it's the height of the peak season, yet the atmosphere couldn't possibly be more chilled.

Venues are almost entirely made of driftwood and natural material host laid back couples, young families, old timers and small groups of backpackers.

"Out of all the islands I've seen, this is probably the least polluted," says Joel Gershon, a Bangkok-based journalist from New York who's spent the past decade exploring Thailand.

"People here seem to care about keeping the place as beautiful as possible and not rushing into developing it in unsightly ways." 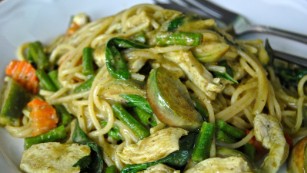 While population pressure now renders my two old favorite activities on Koh Phayam -- bike riding on the main track and fishing off the pier -- unviable, it doesn't take me long to find new eco-adventures on pristine parts of the island.

There's an alternative motorbike track across the island, almost overgrown by jungle and cashew-nut plantations, to explore.

There's also some new culinary creations. I become obsessed with a fusion dish that mixes Thai massaman curry with pasta, ordering it at restaurants all over the island.

I rent a kayak and paddle around Ko Phayam's south coast, where I take a nap on a little beach on an uninhabited islet and discover a river banked by mangroves.

And most importantly, for the first time ever I see the hornbill and its giant yellow beak -- not just one bird but an entire flock of the magnificent creatures exploding like fireworks from a tamarind tree.

It's as if I've been reunited with my first love and all the years we spent apart are forgotten in an instant.

"From a business perspective, things are 100 times busier than it was three or four years ago, says Jessica Waters from the U.K., who took over Baan Nam Cha in 2010.

"The type of tourist who come here has also changed. When I first came in 2008, there were a lot of backpackers. The place had this kind of stoner, hippy hangout vibe.

"A lot of the write-ups I have seen about Koh Phayam say it's like Thailand was 20 or 30 years ago, when you could leave your bungalow unlocked and not have to worry about things.

"So I think what's happened is that a lot of the people who traveled to Thailand back then are now coming back here with their kids.

"They choose Koh Phayam, because it's like the Thailand they remember."