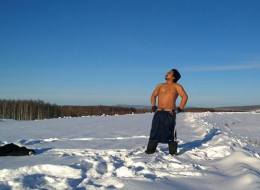 FAIRBANKS, Alaska (AP) — A little thing like a flooded creek was not enough to keep an Alaska restaurant owner from delivering Thai ribs and fried rice to stranded customers over the weekend.

Mike Laiti and Brandon Borgens were completing a multi-day drive Saturday night up the Alaska Highway when they called in their order to the restaurant, which was near closing.

As they approached Clear Creek, they learned a sinkhole had developed from heavy rain near the creek. The state Department of Transportation closed the bridge.

Laiti called Poolsawat to cancel their order at the restaurant more than 25 miles away in North Pole.

Poolsawat hiked up his shorts and waded through the creek, holding the takeout boxes over his head. The cold water was hip-deep.

Poolsawat had already done them a favor by staying open late, Laiti said. The delivery was beyond expectations.

"He'd help anybody out. He's just a really good positive attitude, just a good guy," said Laiti. "He's definitely a goofball character and the food he makes is great."